Zumo XT and Basecamp - Everything That You Need to Know

Having Garmin zumo XT problems? there is loads of help and advice in this forum
33 posts

First of all, thanks for the comments and welcome to the forums.

As far as I know, you can only get to Towns via the address icon.

There are a few things on the XT that are hidden in plain sight. 'Towns' is one of them. Because it is not where you expect it to be, you can't find it, or you don't see it.

In the case of Towns it is 'hidden' in the Where To ? -> Address section - where you get an option to spell a town name or enter a postcode.
Then as you type in the first few letters, options that match appear at the top of the screen.

Choose one of those (or keep typing more letters). It will then ask you to enter a house number, and displays a big numeric keyboard. And because it does that, the smaller option underneath the question mark, top left which says 'Go to (Town)' is completely invisible. I know it is there, but as I went through the steps whilst typing these instructions, I missed it. Again. Hidden it is. In plain sight.

It then displays all of the info about the town, there are a lot more options beneath the screen (the screen is scrollable), and there is the option to 'Go!' to navigate to the point marked with a flag on the map or to 'Save' the location - which puts it into 'Saved' or 'Favourites' depending on which side of the pond you are on.

But if you have used other Zumos, no it used to be in the set of icons that you see when you click Where To ?

There will be many other situations where you will discover that the XT is not the same as previous Zumos. It looks the same with a brighter screen, but it is a completely different beast.

There is another different feature when a route is active.

When you press "Go!", a display on the right hand side of the screen (landscape mode) will pop up showing the Time, mileage and the names and types of roads coming up. This will disappear after about 15 seconds (or you can press the X in the bottom right corner to close it down faster.
The 3 dot menu gives access to other side menus. Trip Data, Music Player, Traffic, Weather, Phone, Turnes, Track Recorder, Towns Ahead, Elevation, Up Ahead, Report Saftey Camera, Photo Live. This displays the distance to the next 3 closest town to your route. Tapping one will show a list of 'things' within that town. 'Things' are fuel, restaurants, toilets and hotels.

The only other thing that I can think of is 'Where To ?' -> Town Halls.

"Town Halls" will not be there on your unit. You have to add it. Click Where To? -> Personalise -> Favourite Search -> Town -> choose town halls.
Town halls will then appear in your 'Where To ?' icons.

You may be able to find another method.
ST1300A9 - Currently: Zumo 590/5 and Zumo XT - Previous: Zumo 550 and Zumo 660.
BTM03 module to provide Bluetooth link to Autocom. XT paired up to Android Smartphone
Top

There was a discussion somewhere about the menu map that I created to show all of the XT menus on one page. For the forum pages I have had to make that map span 4 or 5 separate pages - just to make it legible, which is not ideal.

I have now created an A3 pdf file in landscape format and attached a link to it on the introduction page of the menu map. Page 87.

Feel free to download it and print it. But please don't post it on any other forums.
ST1300A9 - Currently: Zumo 590/5 and Zumo XT - Previous: Zumo 550 and Zumo 660.
BTM03 module to provide Bluetooth link to Autocom. XT paired up to Android Smartphone
Top

I want to try something

Email is in profile which would then not resize the image

Do you mean the size of the picture of the biggest single menu image that I have ?

Do you mean the size of the picture of the biggest single menu image that I have ?

I don't know what you mean by 'email is in profile'

It would be best to email it as the forum software restricts sizes and affects the quality
www.themotorbikeforum.co.uk
Top

Zumo XT: Trip-Tracks - Some more that you need to know

The detail of this feature is explained here: app.php/ZXT-P53
But a very brief summary is provided below

What you get is not a Trip, and it isn't really a route. I don't know what it is - but it draws a magenta line on the map, and it issues verbal instructions - just like navigating a route. But unlike a route, it has no intermediate points and it will never change its position on the map. It is fixed in place.

So - No, it is not a route in the normal sense. It was a track. Garmin convert it and they call it a Trip. But it isn't a Trip. So I call it a Track-Trip, which I think I will abbreviate to TT

But if you deviate from a TT, it does something really clever. It realises that you are off course, and it calculates a way to get you to that closest point. It takes out a pair of scissors, and snips off the magenta line that came before the closest point and replaces it with the new route to take you to the closest point. Joined together it has created a replacement TT - most of which is the same as the original.

This is brilliant - but it comes with a "Gotcha !", which I have only just spotted. If you create a circular route or a long thin oval route, and you wander off course - the Zumo is going to try to get you back onto the TT by finding the part of the magenta line that is closest to your present position. If your deviation from the TT involves going towards the centre area of the circle or oval, the closest point might well be on the road home. It could end up being a very short ride.

It doesn't do this all by itself - it will only do it if you deviate from your intended course and you are closer to the return section than the section you abandoned.

Moral - Be very careful plotting a circular or figure-of-8 rides when using Convert to Trip.

I reported an issue a little while ago here: viewtopic.php?t=1582
I now have some explanations as to what I believe was happening.

Just a reminder. I was following a route that I had plotted. The Zumo decided that its 17 mile route faster, and I decided my 12 mile route was better, and ignored it. There was only a minute in time difference, so that's OK. I took the route that was more fun to ride.

I expected that after I had ridden a mile or two, the XT would give up nagging me to go back and start to navigate me ahead to the next route point which was plotted a mile or so after our two alternatives met up. It didn't and kept nagging me to go back. Here is the screenshot. The orang flag is the Via Point. The bike is heading south and is 2 miles from the Via Point. The route is what the XT is telling me to fo. Go back to the corner at the top of the map and continue down the road that it has plotted. 28 miles to reach the Via Point that is just 2 miles ahead.
(Ignore the restaurant symbols, they are not relevant). 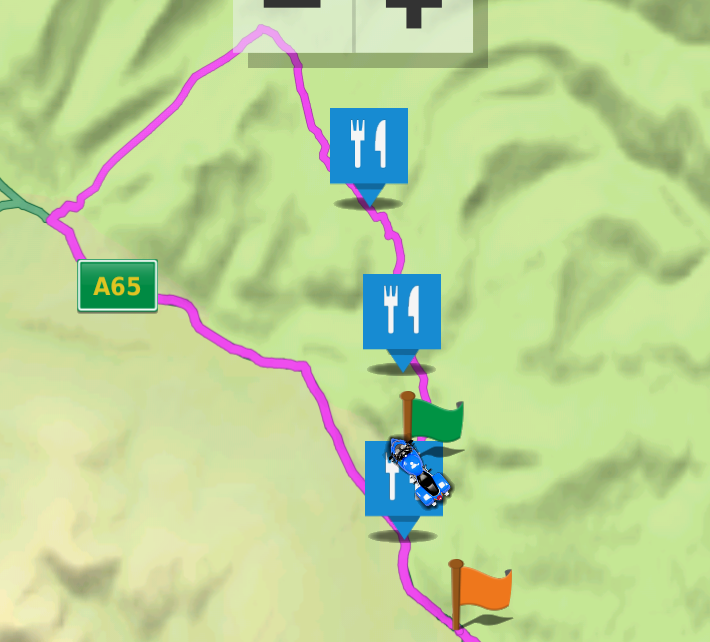 Normally, when you deviate from a route with Via Points and Shaping Points, the satnav will recalcaulate a new route to the next route point. That works perfectly OK. Except on this occasion, it didn't.

Well there was a difference. Part way around the route I had pressed skip - because I didn't want to visit a particular Via Point place about half a mile of route. And then I continued 8 miles to where I had the problem.

So when I deviated from the magenta line that it wanted to take me on, It appears that I wasn't deviating from a normal route as I believed. It seems that I was deviating from a Track Trip. And Track Trips do not budge. And the subsequent behaviour was extremely similar to the behaviour that I discribed above when my Track Trip had picked out the section of the route home.

I can't think of any other explanation except that the nature of the route had been changed to a Trip-Track, and that this was a consequence of pressing Skip.

So - the current situation is that if you are following a route, and you deviate, everything works as it should. The route gets recalculated to the next route point, and all is well.

If at any point you press 'Skip' in a route, the route also gets recalculated. But the route that it produces now seems to have the properties of a Track Trip. And if you deviate from that, it takes you to the closest point on the original magenta line, which in my case was always going to be behind me.

Remeber that scene in Wallace and Grommit - The Wrong Trousers - with the pair of them on a model railway and Grommit is feverishly laying down the track in front of the engine ? - Well this was doing something similar - except it was laying dwon track behind me so that I could turn round and follow it back.

At the moment, Skip seems to be a very dangerous button to press. Stopping the route and restarting it using Closest Entry Point may be better. But I haven't tested that.

I reported the original issue to Tech Support and had a few very lengthy email exchanges. I've now reported this discovery. It seems to me to point to the solution - but only they can choose whether or not they fix it.
ST1300A9 - Currently: Zumo 590/5 and Zumo XT - Previous: Zumo 550 and Zumo 660.
BTM03 module to provide Bluetooth link to Autocom. XT paired up to Android Smartphone
Top

I recently bought a Zumo XT, and I'd like to thank you @jfheath for writing and sharing all theses precious informations and experiences about Zumo XT's, BaseCamp's and other software's behaviour.

Thanks to you, I rapidly learned how to efficiently plan a route on my computer in order to be guided afterwards EXACTLY through it by the Zumo on my motorcycle. This would have been MUCH longer to achieve without the detailed experiences and understandings you shared.

So many many thanks, the work you did and share is really awesome !
Top

A big huge big massive thanks to @jfheath from Garmin newbie (5 years on TT400). I've really found these pages very helpfull to learn me understand Garmin's thinking and special thanks for hidden tips.

Anyway, this is not true now: "Hold battery icon, top right, for 5-10 seconds. Opens a screen of test pages. Buttons are (not) labelled - but should be ‘Exit’, ‘Back’ & ‘Next’" - I have icons already labeled.

I cannot PM yet because newbie, I'd like to kindly ask for pdf format to have it offline in my mobile.

Keep doin' this good job dude and thanks