Due to the gps week number rollover bug in older units, I consider buying a 59x.
However, I need to know if it detects the correct date.

Where can I see the date in the 590/595? I don't see it in owner guide.
There is no word clock app? It seems to have sunrise sunset, so there has to be a date in there!
If the WNRO bug is not fixed on this model, then it should think it is in september by now.

If there is no UI to show the date, can someone export a triplog done after april 7th 2019 so we can have a look at the dates in there?

PS: please provide the first 4 digits of the unit id, if you can. This can make a difference (older units may be flawed).
Top

Hi,
I have just checked my 595 (I didn't see your earlier message sorry.)

My Garmin does not have an easy way of seeing what the date is on the UI.

However, I checked my last trip (yesterday) - from work to home and the date is correct. I tried to upload a screenshot of the trip log, but I was not successful.

Diagnostics screens! One has to hold the speed cell for 5-6 seconds and it enters the diag screens, few of them showing dates for various reasons. see

If you could find those diag screens in the 595, that would be the best hope.
Let me know if you can find them and if you have dates past april 7th 2019.
Top

595LM date..... what a pain! I have searched & searched and found nothing that says, "Today is....". I did find diagnostic screens but no date there. The best I can find is:

- connect to BaseCamp;
- click on INTERNAL STORAGE on the left under Device;
- in the search box top right, enter the word date, search;
- in the drop down, at User Data in Internal Storage, click more. Do this quickly, if you wait too long it doesn't work;
- what shows up are Active Logs. Are the dates right?

The diag screens of the video show "shutdown causes" with dates.
Also, from the zumo660, I suspect there should be something like the "next defrag" date, proably in the developer info.

If any of these are april 7th 2019 or later, that would be good enough for confirming the device CAN understand the WNRO, without having to connect to pc.

Otherwise, exporting a trip log and viewing it on base camp would be enough.
Top

All the dates on my active track logs on my Z590 are correct as recently as yesterday May 1. 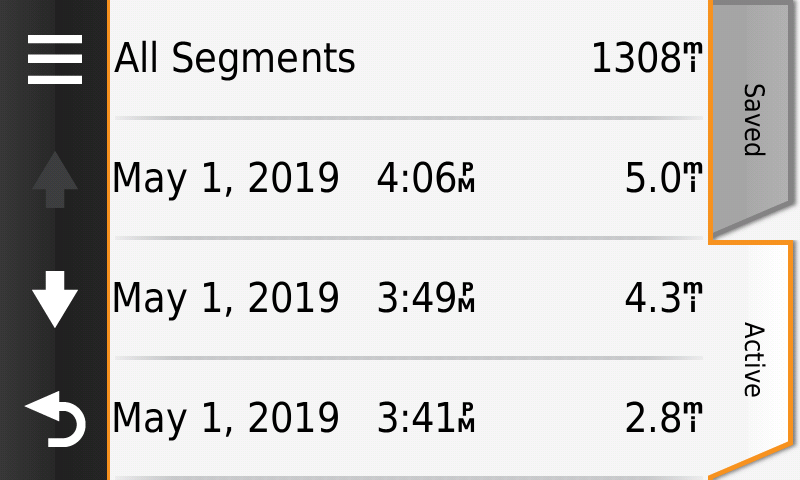 What would make you think that Garmin would not have addressed this issue considering it's been a known issue since the last GPS Week Rollover back in 1999. I might be concerned if I was using a 10 year old GPS but with the extent that Garmin has deep penetration into the commercial aviation and marine markets it's kind of hard to believe they would have blown this.
Learn Garmin Basecamp with New England Riders Tutorial:
https://www.newenglandriders.org/learn-basecamp/
Top

What would make you think that Garmin would not have addressed this issue considering it's been a known issue since the last GPS Week Rollover back in 1999. I might be concerned if I was using a 10 year old GPS but with the extent that Garmin has deep penetration into the commercial aviation and marine markets it's kind of hard to believe they would have blown this.

Thanks. I just asked a friend to check his trip log segments too and it confirms that 595 supports correct wnro.
Great simple way to check it.

I know for sure zumo 660 fails to handle wnro. I have one unit and it's failing to recon the day, hence my inquiries about 595 for upgrade.
Some people said this happens after the battery is removed (clears the internal clock), which I did for a crash after an update on the 4th. Since I'm indoor, it didn't acquire sat signal until a week later and so it failed itself forever... (if only I could make it think it is just pre- april 6th again every time I remove battery, it might work around. But how do I fake a sat signal without expensive testing equipment...)

Today may 2nd 2019, it thinks it is sept 16th 1999 (it's exactly 19 weeks and 4 days later). It has incorrect sunrise/sunset, the night mode kicks in at wrong time, dst change will be the old rule at last weekend of october 1999 (should be on our father's day) and first weekend of april 2000 (3rd week of our november), time cannot be set to automatically, and the time zones rules are out of ranges and can't be populated in the world clock app. Finally and none the least, the trip logs have incorrect dates of course.
Top

If you have the "weather App" you can see the day and date. I don't have the gps in front of me but basically open the weather app and touch it to get he next 5 days. each day ahs the day and date on it. If you are navigating and not near your destination it will show the weather over the next few hours instead. But if you click on any point on the map and look at the point you have opened scroll down to get the weather for that point and it will also give you the same next few days of weather along with the dates.

BTW GPS works by knowing the date and time to the millisecond (or is it nanosecond?) ifs you haven't messed around with time zones it will always have the correct date and time as long as it is getting a satellite signal.