Got an interesting riding route in the USA you want to share?
Post Reply
8 posts • Page 1 of 1

Is there a uniform way that we can post routes traveled.

I have GPX files for all the routes I have taken. So, I could post them as GPX files if there was a way to do that and share them.

For instance, last weekend (well a long weekend) I traveled some routes recommend to me by someone else. It was an excellent ride. So, I could share the GPX files here with comments it there was some way to make the files available.
Top

There are a lot of sites dedicated to routes, e.g. http://www.openroadjourney.com/rides-and-roads
They seem better suited to users looking for routes with their map view overviews.

A files area would be nice.
Top

I've been thinking about this a lot lately. I tend NOT to ride other people's routes mostly b/c other people aren't as fickle as I when riding. It's not at all unusual for me to abandon a route completely b/c I'm tired or hungry or unexpectedly cold. Also I've been pretty lucky over the yrs just making routes at random with a couple of criteria:

1) avoid interstates but route basically parallel to them when possible. They can be useful;
2) 2 lane US Hwys are generally ok but see #1 when 4+ lanes are encountered.

That said, over the last 5 or 6 yrs the only reason I made routes for non-multiday trips was to achieve "my goal". See, after 15 yrs of heading into the North Carolina mtns I've ridden nearly every road there is, including most of the dirt National Forest Roads, so I decided to do something different. I decided to visit all of the NC State Parks on my bike. At the time there were 27 parks and I discovered very quickly the reason I had been to maybe one or two- they're at the ends of dead end roads. We pick loop routes, who in his/her/its right mind rides to the end of a road? So the trek began, 27 state parks from the ocean to the mtns. But along the way I found State Forests, Educational State Forests, State Recreational areas, Lighthouses, etc. So now the list is up to about 60 different places I've visited just in my own state (see pic below), which brings me back full circle to the first sentence. I've been thinking about it a lot lately because, as far as I can tell, I'm running out of places to go here. Riding a loop doesn't really interest me all that much anymore, I desire more. So all this comes down to:

what do you do to keep yourself amused or do you just ride a loop and go home? 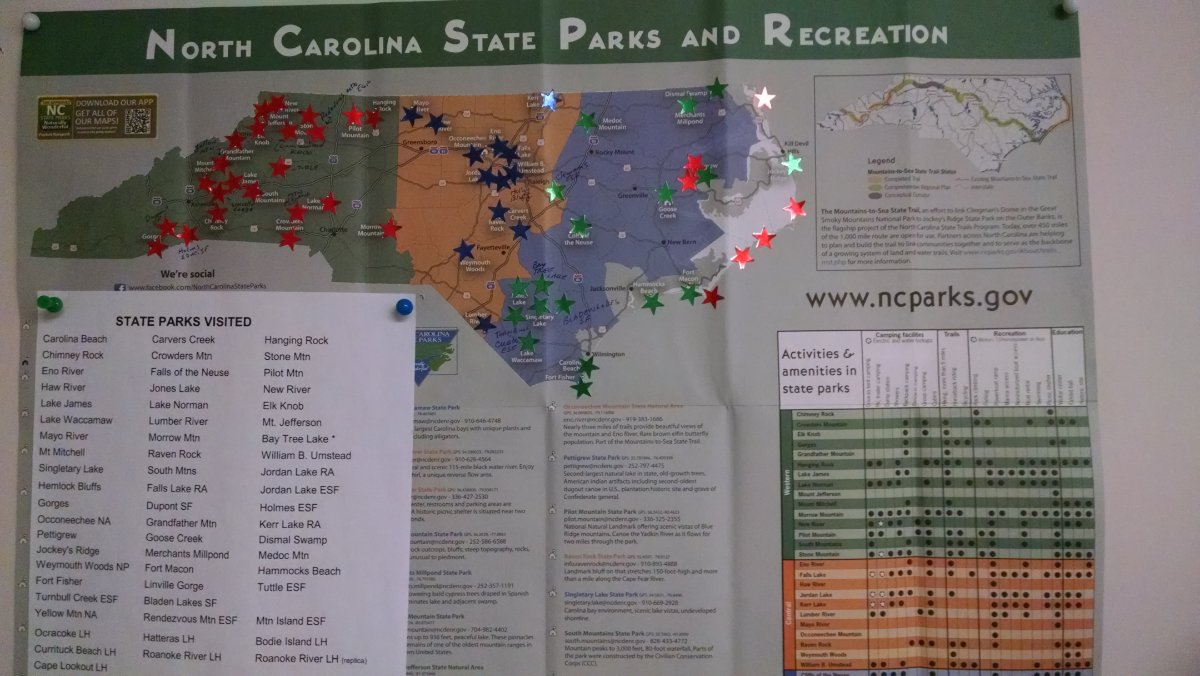 You know, for some reason, I missed your response to my question so, while its been a few weeks here is my answer.

I find I have been on most roads in my area, but if I want to just go ride for an hour or so, I do a loop, try to keep it different from the last time as much as possible.

Before I retired, I got to ride to work almost every day and that, while being the same basic route, was "riding" so it was nice.

Now I try to explore the rest of the states. Did a trip to Arkansas just because we did a trip there in 2006 and I wanted see a place I had stopped before and met some fine people.

Got a trip to Missouri planned in April and a trip out west in June. Then a trip around Lake Superior in September.

We are planning to get on US70 (NOT I-70) near Knoxville and take it to its end in Globe, Arizona. Then wander back. Someday we'll take it East to the coast. There are a lot of East-West and North-South US highways. Pick one and go!
Top

Yeah, we do this. Anyone who has been through North Myrtle Beach has probably seen the Sea-Mountain Hwy. We rode from the west end in Black Mtn, NC to the ocean in one day, just to say we did. And the entire length of NC 211, Southport, NC ferry included. And NC 73. And US 64 in NC- that' a long haul. We're planning on the BRP from the south end this summer. From Cherokee, NC to Asheville is the only section I haven't been on and two other guys have never been to Mt Mitchell, the highest point east of the Mississippi River.

Also, check out -> https://www.hdcarolina.com/ (hd = hi def, not Harley Davidson). Great suggestions of things to see when rambling about. I found this site (click the MAP link there) just a few weeks ago and have already incorporated a few stops on the BRP ride.
Russ B. Zumo 595,
2007 Yamaha FJR1300A, 128k and counting
Top

carolinarider09 wrote: ↑
Tue Mar 05, 2019 10:37 pm
There is also another option. There is something called Meetup which usually has motorcycle riding groups that might provide another option.

BRP - you have missed the best part! Stop in Maggie Valley and visit Wheels Through Time.
Top
Post Reply
8 posts • Page 1 of 1